There is always a story behind each PBU project. Sometimes these are the stories of people whose lives had been strongly influenced by the projects. There are also the stories of people who brought these changes into their regions, committed and passionate about their mission. In some cases, the places are the true heroes of our stories. Places, which can tell much about the turbulent history of cross-border land, connected with the destinies of people, who lived here. We have a pleasure to present the story about a very special place, which is now the venue of our security-related project. We hope that this project will mark the beginning of the new story, the story of revival and serving the people.

When travelling in Ukrainian Carpathians, across Chornohora range, you will be surprised to see a large interestingly shaped building on the top of the mountain. This local landmark is the observatory of Pip Ivan Mountain, built in the 30th of the past century and neglected for more than 70 years.

Its genius loci is continuously attracting travellers. It inspires artists and writers. A deserted observatory in the mountains is a key location of the novel Twelve hoops by Yuriy Andrukhovych, Top down. A book of fears by Tanya Malarchuk and White Elefant by Mariya Rymar. "White Elephant" is a local name for the observatory because its building, covered with ice and snow resembles a giant animal. “White elephant” also means a valuable but useless thing. It was a sad fate of this magnificent building – being abandoned and deteriorating with time and neglect.

In the first half of the 20th century, Pip Ivan was chosen as a location of an ambitious project of the Polish government (at that time it was the territory of the Second Polish Republic) – the astronomic observatory. The construction started in 1936 being a large and complex undertaking. In total, nearly 800 tons of construction materials had to be delivered from the railway station Vorokhta to the site on Pip Ivan (about 70 km). In two years, a building shaped like a mirror image of letter L was erected on the top of the mountain. It was described as “monumental”. The walls made from limestone blocks were 1.5 meters thick. The building had five floors, 43 rooms and 57 windows and was equipped with the use of most advanced technologies of these days. Astronomical and Meteorological Observatory named after Marshal Jozef Piłsudski was opened on July 29th, 1938. Władysław Midowicz, geographer and meteorologist, a native of Mykulychyn village was appointed a director of the Observatory. He moved to the Observatory together with his wife and five-year-old son.

Unfortunately, the Observatory functioned for one year only. On September 1st, 1939 World War II broke out. On September 18th all the staff had to leave the building. All valuable equipment and documents were removed or destroyed. Władysław Midowicz immigrated to Hungary, then he lived in Indonesia and Australia but he always had Observatory keys with him. On his death bed, he gave them to prof. Kreinery with the instructions to transfer them to the University of Warsaw. This is where they are kept, waiting for opening new doors to the rebuilt Observatory.

It was only in the 2000-s that the issue of Observatory revitalization was raised for discussion again. Centre for East European Studies at the University of Warsaw and Vasyl Stefanyk Precarpathian National University generated a common vision of its future. Their idea was not only to reconstruct the building but to give it a new meaning – to serve for education and research purposes and contribute to people’s safety in the mountains.

The idea found support in Ukrainian and Polish governments. Step by step the funds were secured and renovation works started. First of all, the building was cleared from the garbage, the layer reached human height! Reconstruction works included, in particular, replacement of floors and roof framing. The roof was covered with brass plate. The stone fencing and gate appeared. Several rooms were adapted for temporary accommodation.

Since 2017 a rescue station has been functioning here. Rescue workers of the 4th specialized search-and-rescue team of State Emergency Service in Ivano-Frankivsk Oblast permanently live here, working in shifts. In this way, Pip Ivan Observatory is now considered to be the highest inhabited place in Ukraine.

The project “Adaptation of former observatory on the Pop Ivan Mountain to the needs of alpine rescue service training centre” (PIMReC), funded within Cross-border Cooperation Programme Poland-Belarus-Ukraine 2014-2020, is the next significant step in the revitalization of this unique place. The project was designed by Vasyl Stefanyk Precarpathian National University, the University of Warsaw, the Emergency Service in Ivano-Frankivsk oblast and Mountain Volunteer Search and Rescue Bieszczady Group. The project will help to create a highly efficient 24/7 alpine rescue point and a trainings centre. “Along with being an important research facility, it will be one of the best alpine rescue schools, where the rescuers will be trained and the crews created to work in the observatory.” – explains Igor Tsependa, the rector of Vasyl Stefanyk Precarpathian National University. This aim will be achieved through the renovation of premises and their adaptation to the purposes of rescue point and a training facility. Also, Polish and Ukrainian mountain rescuers will participate in joint trainings with a focus on up-to-date rescue techniques in various weather conditions. The project team also plans to create a sustainable system of emergency response. To this end, the electronic services platform will be created to serve for the exchange of information and know-how between Polish and Ukrainian rescue teams at the same time helping tourists to ensure safe hiking in the mountains. The above mentioned activities will improve the professional level of high mountain rescuers and volunteers, contribute to the development of comprehensive high mountain rescue system and increase the awareness of safety issues in the cross-border community.

Jan Malicki, the Director of Center for Eastern European Studies, observes: “When I visited the Observatory for the first time in 2007, only the most optimistic people could believe it would be renovated one day”. The Observatory means a lot to him, as well as to Igor Tsependa, as well as to many other people – scientists, researches, rescuers and volunteers. They are proud to contribute to its revival. They hope that their joint efforts will help to make this remarkable tourist attraction more accessible and safe and that more people will be able to discover it. 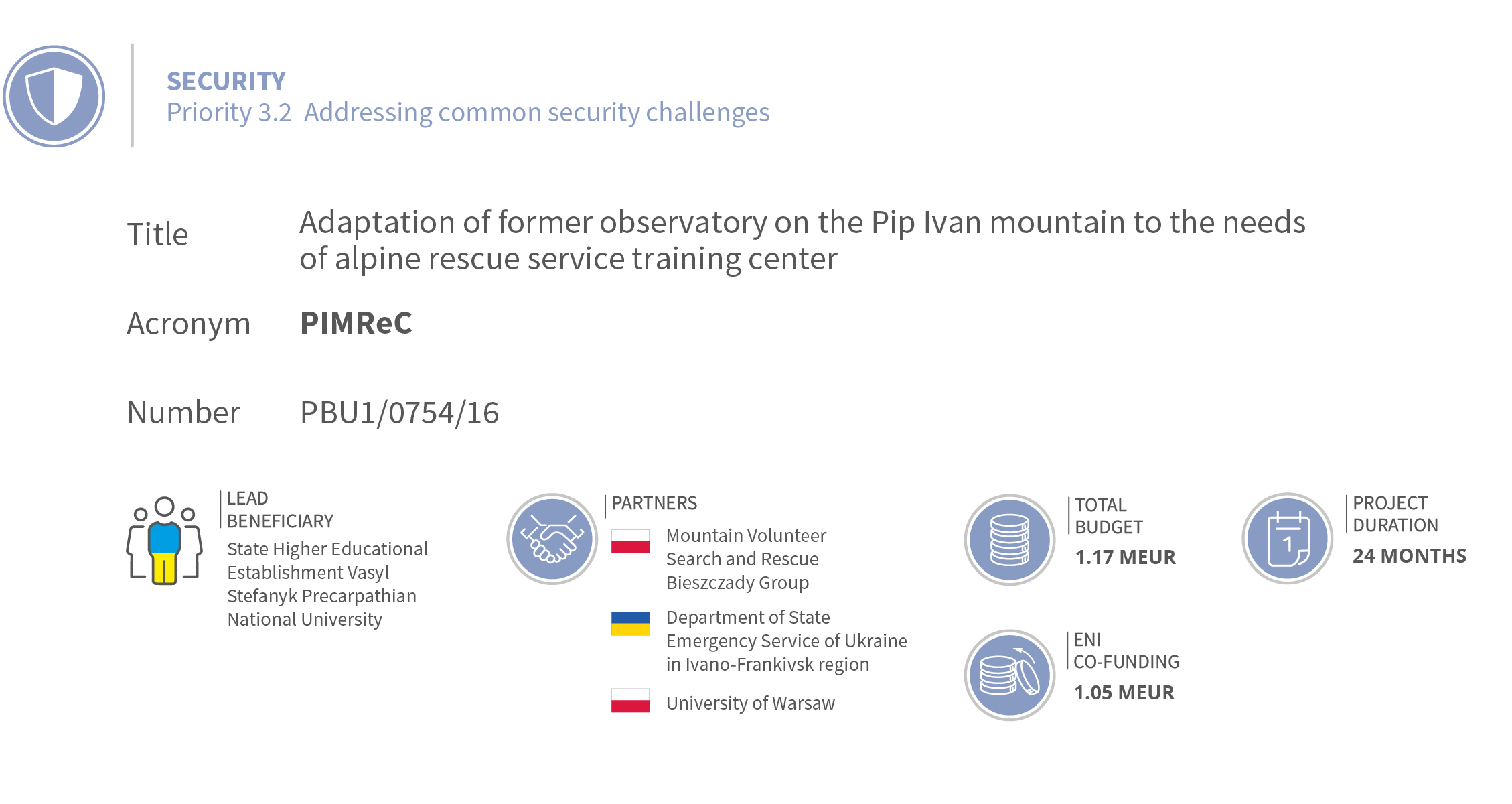