First, he often cried, had sleeping problems and lost his sense of balance. Apparently it was nothing to worry about, after all it happens to newborns. The doctors would always say: "He will grow out of it, everything will be all right, an overzealous mother". When he was 2, he put his hand into a fire and watched. He didn't even scream. After this incident, eventually, the doctors made the correct diagnosis: "Autism". At that time, according to the statistics, cases such as these were 1 per 10 000 births. The first reaction: "It’s too bad that this happened to my child" - recalls the mother of 19-year-old Jakub, Anna Chwałek. Straight after – mobilization: "There are certainly some institutions: kindergartens, schools, centers, where I will get help, where Jakub could learn normally, grow among other children". Research, phone calls, visits to Warsaw and... nothing. Optionally, several hours of special exercises per week - the rest of the time the child would have to spend at home. In the hometown of Biała Podlaska, near the Polish-Belarusian border, there was no such specialized center at all. At the beginning, Anna got help from one of Warsaw’s foundations. Once a quarter, she traveled with her son almost 200 km to the capital, where he had some exercises. The rest of them he had to perform with his mother at home as "homework". It was, however, insufficient to ensure the boy's proper development, especially since he and his needs had been growing.

Encouraged by the foundation in Warsaw, she began to think about establishing an association in Biała Podlaska and creating a specialized center there. It would ensure a multi-stage development from childhood to adulthood, for people with autism and related disorders. "I needed time to reach this decision, it took me 2 years. I left my professional career for the association. I found parents with similar problems, a few allies. And that's how it had really begun" - says Anna. Nowadays, thanks to the "Common World" Association in Biała Podlaska, there is a diagnostic and therapy center for children and adolescents with autism and Asperger's syndrome, as well as a kindergarten and a primary school. These institutions give support to almost 200 people from the city and the northern part of the Lubelskie Voivodeship. Nevertheless, the children are growing, as well as the numbers in medical statistics are increasing dramatically. It is estimated that today 1 in 150 born children, or even 1 in 80, have similar problems. Parents, relatives, guardians and others around them have to also deal with these problems... Becoming an adult is a problem as well. There is nothing waiting for those young people, there are no systemic solutions on how to look after them and how - at least in part - to enable them to stand on their own two feet. Therefore, the next step is needed - the construction of a School Preparing for Employment and Environmental Self-help House and House of Permanent Residence for Adults with Autism. The Cross-Border Cooperation Programme Poland-Belarus-Ukraine 2014-2020 will help to take this important step.

The "Common World" association has engaged partners from the other side of the border, because the same problem exists in the Brest Oblast in Belarus - lack of access to specialist care for people with autism and lack of support for their families. As a part of the joint project titled "Development of cross-border cooperation in helping people with autism on the Polish-Belarusian borderlands", a Specialist Center for Helping People with ASD will be created in the adapted and renovated rooms of a special school in Brest near the Bug River. It will be the first center in the entire country. Moreover, both parties are planning purchase of furniture and IT equipment, joint events to exchange experiences: conferences, training sessions and study visits, as well as sport and recreation events for the proteges. These investments and activities will result in improvement of living conditions of about half a million inhabitants of the Lubelskie Voivodeship and the Brest Oblast. From now on, every family in which a child with autism or related disorders will be born, will be able to find professional help and care. At the same time, the experts will obtain new knowledge and skills which will result in a more effective therapy for the proteges.

Thanks to the financial support of the European Union, the project titled "Development of cross-border cooperation in helping people with autism on the Polish-Belarusian borderlands" is being implemented  within the Cross-border Cooperation Programme Poland-Belarus-Ukraine 2014-2020. 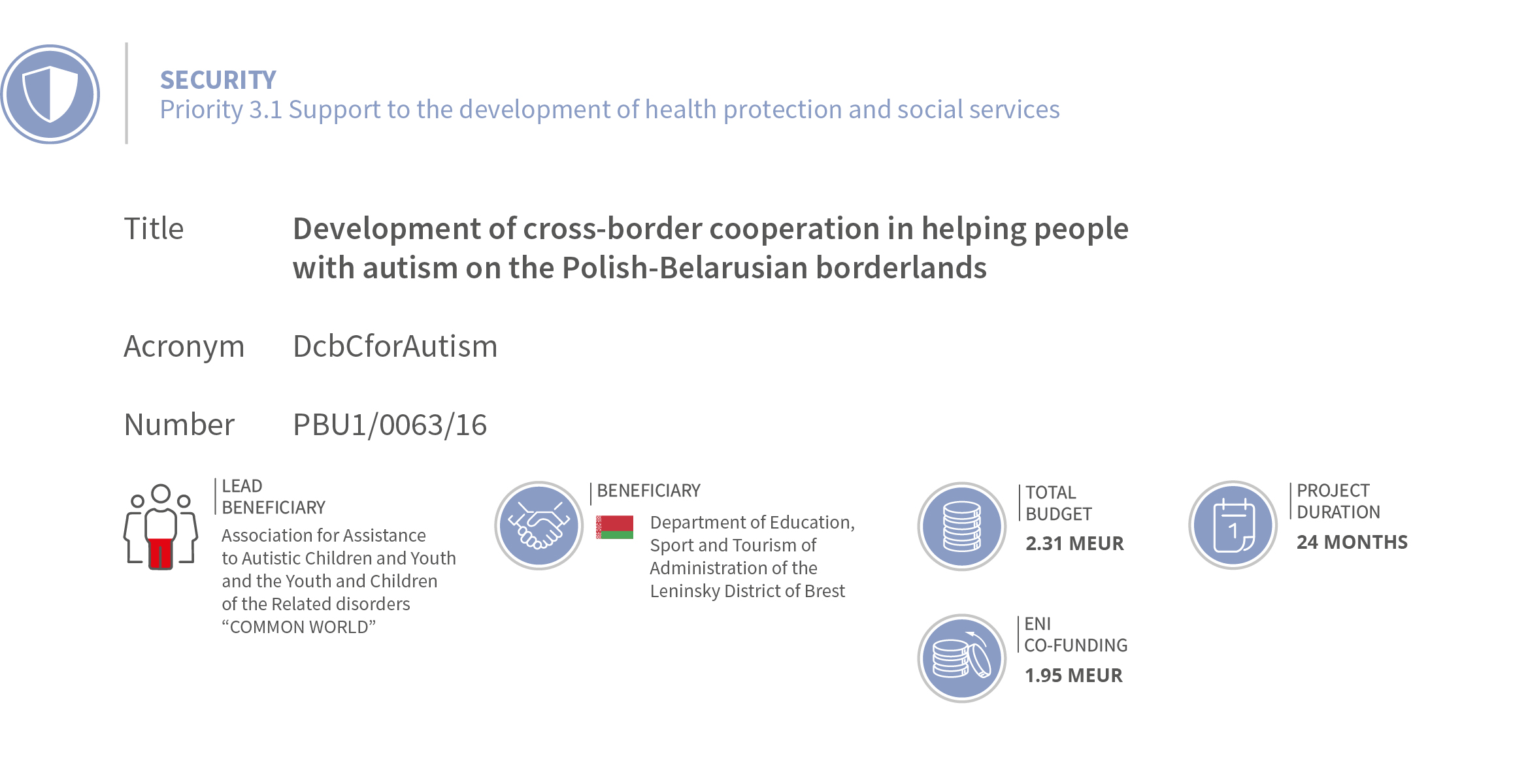