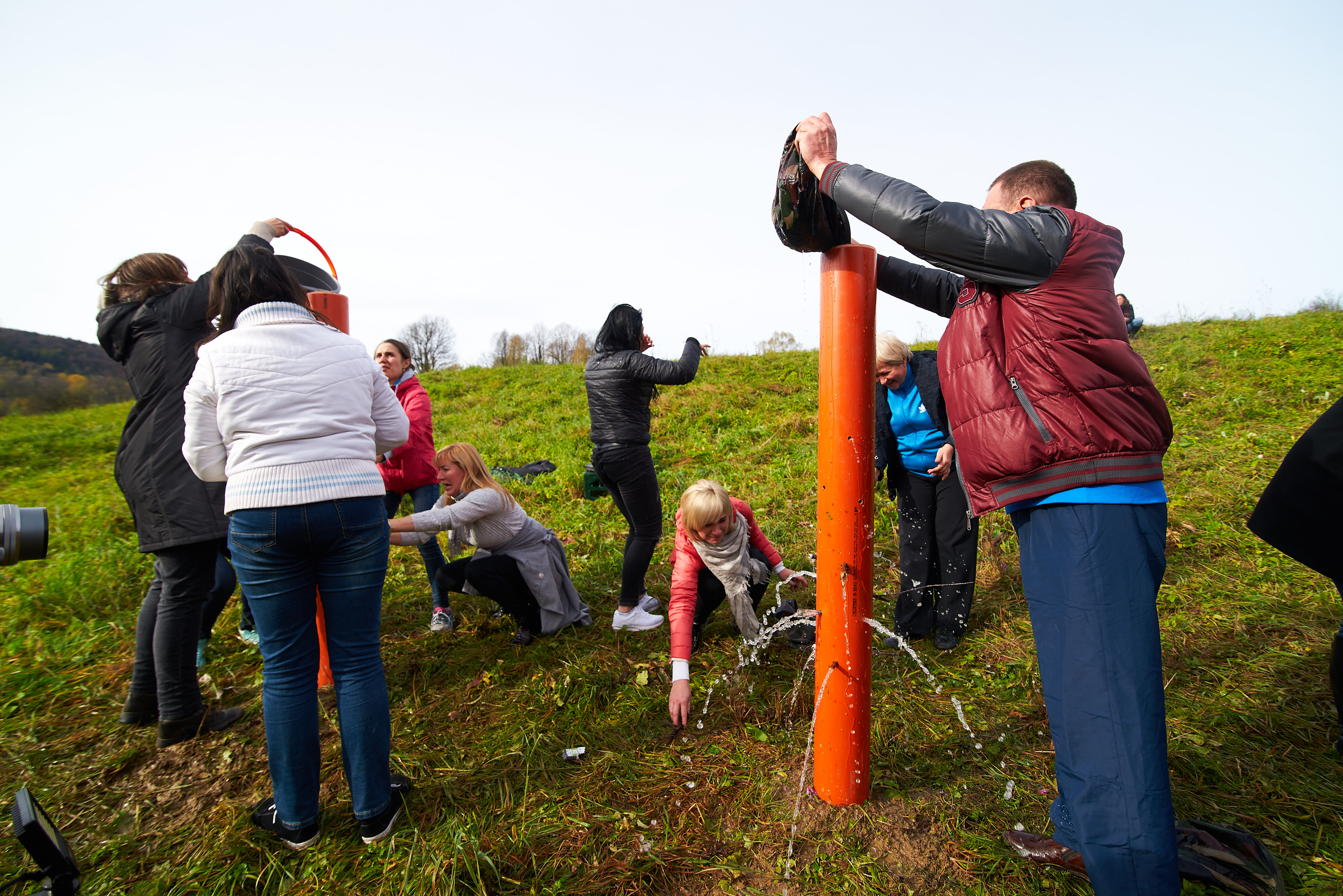 Bieszczady 2017. The annual event of the Programme. This is where the idea for the project was born ...

We want to bring some of them closer to you by the "Project stories" - the cycle which presents their more human (but also animal - as in the 1st and 13th episode) dimension of our selected projects.

We invite you to read!

Such places are referred to as "the end of the world". Or possibly it is "the world’s beginning"?... It all depends on the point of view, because for many people so many things begin here ...
It began in Gorajec, a new life for Marcin Piotrowski, a boy from Tomaszów Lubelski and his wife Marina Sestasvili, an Estonian girl with Georgian, Polish and Russian roots. They met at university, and then in the tiny Gorajec with only 35 inhabitants, on the Polish-Ukrainian border, they spotted an old school building in need of renovation and dreamt of turning it into a tourist guesthouse. Surrounded by hectares of meadows and forests, a kilometre to the nearest house, while through the windows an elderly neighbour of extraordinary beauty – a sixteenth-century wooden orthodox church – looks in.
Fuelled by their energy, the „Folkowisko” festival was also initiated in Gorajec. That melting pot of cultures for several years now gathers hundreds of guests from many countries: Japan, Mexico, Canada, China, Spain, Italy, the Czech Republic, Ukraine and Bulgaria and was awarded with the European EFFE title (Europe for Festivals, Festivals for Europe) next to such prestigious events as Camerimage or Wratislavia Cantans. It is accompanied by workshops of dying crafts and meetings with the unspoiled nature.

"And with people who are very friendly here, non-commercial towards reality and still have time for others."

This is how it begins in Gorajec, a new life – the "slow life" of numerous busy city people who are looking for a respite from the big city rush, smog and noise, who want to free themselves from  tight corset of large corporations and  equally stifling walls of blocks of flats. Arriving in Gorajec, they breathe deeply the fresh air, sighing with relief: - No Wi-Fi, no touch ...

This is how it began here, the dream of new ventures:

"We don't want people to come to us only for concerts, but also to participate in the workshops and rallies that take place in the area. During hiking, biking and canoeing trips, they can get to know the flora and fauna of this place and understand its phenomenon, not to mention having fun - excites Marcin Piotrowski during the conversation."

And it began with a meeting:

"We met in October 2017 in Rzeszów at the Annual Event of the Poland-Belarus-Ukraine Programme organized under the slogan "Cross-border Warm-up"."

"It just sparked somehow during integration, joint off-road trips. A team that likes such a touristic atmosphere gathered there, we talked a little, exchanged contacts and then, during a joint brainstorming session, we assessed our strengths and weaknesses, determined what we needed - we knew that what we and they wanted was to act in tourism."

The partners also came to the conclusion that they want to attract tourists all year round. The very idea for the title of the project appeared a bit by accident, notes Olga:

"When we were already returning home, admiring the beautiful landscapes of Podlasie, a sign "4 SEASONS" flashed above the road. This is how the idea to create a micro-project emerged, because there are 3 national parks in the Volyn Oblast: "Szacki", "Pripyat-Stochód", "Cuman Forest". The Volyn region is heavily wooded, with numerous lakes, rivers and swamps, it has remarkable ethnographic, historical and cultural values. It can be visited and explored in all seasons!"

They put their ideas into a joint project. In order to involve the inhabitants in their activities, competitions for tourist routes for 4 seasons were announced on both sides of the border. From among many original applications, Marcin and the team of the Cieszanów commune chose the following routes on the Polish side: ornithological, running, mushrooming and ... PGR (former state farms).

"This idea surprised me, but it is my favourite. Even in winter, you can drive to state farms and see what life was like there in the past."

Information boards with QR codes will be placed along the routes, a joint trilingual tourist guide and brochure will be published, and 9 short promotional films will be created. People from Ukraine and Poland participated in the "Tourist Mixer" – a meeting aimed at exchanging ideas and refining new tourist products under the supervision of experts. The partners admit that many new ideas for the future have already arisen during this cooperation.

More information on the 4_SEASONS project can be found here.