Project Stories 22. A Beam of Hope 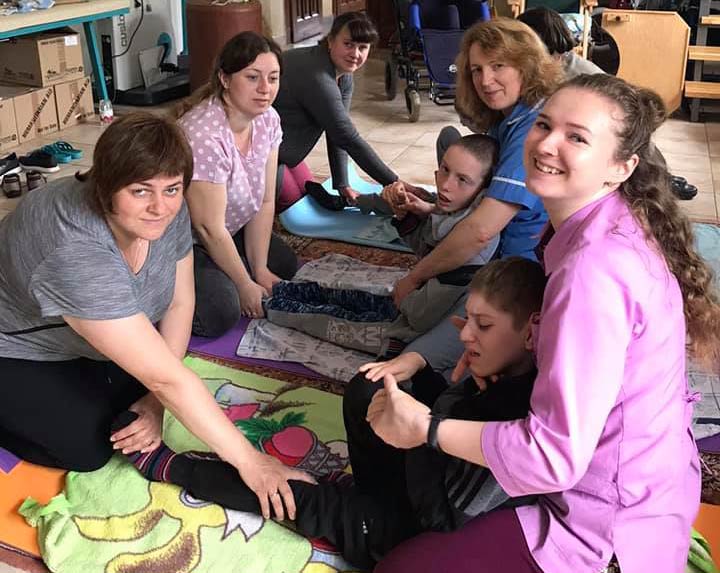 Alla Andrushchuk, the initiator of The Borderland of Equal Chances project BEC, shares her touching story, which began long before the project was written.

Alla is the mother of four children, two of whom have serious health issues. The eldest daughter was diagnosed with abrasion of hip joints caused by a birth injury, which was discovered only in her high school. Being a university student, she lost the ability to walk, waiting for several years for a complex surgical operation.

When I was in my forties, I was expecting the birth of my youngest son and was absolutely confident that everything would go well this time. Unfortunately, it wasn’t the case. When the boy was born he could not breathe on his own. Doctors were pessimistic about his chances of survival preparing me for the worst. But, by some miracle he began to inhale and swallow, gradually he was able to move and eat. On day 14th, he was disconnected from the devices.

Nevertheless, that trauma had serious impact on boy’s health. He was not developing properly. Alla consulted numerous doctors, visited more than ten sanatoriums and rehabilitation centers. These efforts brought out the results – at the age of 7 the boy made his first steps. It was a great achievement. The eldest daughter, who was 25 at that time, after the surgical operation, got to her feet again. A lot can be said about the way Alla and her kids went through to achieve that, but to put it shortly, the sleepless nights, utmost exhaustion and extreme mood swings – from complete lack of hope to happiness – all these were with Alla through these years.

At one particularly difficult moment, when we were expecting the operation of my eldest daughter, and the younger girl had her fifth pneumonia in a year, I promised that, if all went well, I would dedicate my life to the children like my own.

At that time, Alla started to communicate with other parents of children with special needs. She saw that only parents truly understand problems of their children. In 2012, together with alike thinking parents, she created the charitable fund ‘Live with Hope’ and in 2015 - the Society of Children with Disabilities ‘Dawn of Hope’. They together organized fundraising to provide medical treatment and other assistance to the children and tried to attract peoples’ attention to their problems.

However, what Alla really wanted was a comprehensive solution. She was searching for the new opportunities, participating in the international events. Her first project with Polish partners was an effect of contacts gained during the Eastern European Initiatives Congress in 2013. During the study visit to Poland, she was able to see how children with special needs got the treatment and rehabilitation, how the education and support is provided to them. The contrast between what she saw and what she had at home was dramatic! But that experience tremendously affected her perceiving of opportunities.

Finally, one unexpected meeting changed her life. During a visit to the Association for Children with Disabilities ‘Step by Step’ in Zamość (Poland), she met an amazing woman and a wonderful doctor - Maria Król. When it turned out, that Alla lived in Kremenets (Ukraine), Maria told her the story of her family - before the II World War, Maria’s mother also lived in that city. Besides common roots, both women are mothers of children with special needs. This is how their cooperation started. In the consequence, specialists of the Association ‘Step by Step’ came to Ukraine, or Ukrainian children were sent to Poland for treatment. Subsequently, together they managed to prepare the project which is now being successfully implemented under the PBU Programme.

The idea of the project is quite ambitious, especially for the Ukrainian side, not only in the region but for the whole country. The center for children and youth with disabilities is being built in Kremenets, which is meant to provide rehabilitation, education and socialization for 100 persons at the same time!

These children are fully dependent on their parents, who are dreaming that their children will become more independent, able to master a profession and interact with other people. That is why it was so important to open a school in our center.

Another centre will come into being in Zamość and will be able to accommodate 28 adults suffering from motor, mental, speech, sight and hearing disabilities. In addition, the project’s partners will organize staff trainings and exchange of experiences for 50 therapists from both countries.

Alla dreams also to organize eco-workshops, during which one would be able to master professional skills as well as to set up a social enterprise where young people would have an opportunity to work. Another idea is to have a temporary residence home for children with special needs and their parents.

We wish that one day all her dreams and plans will come true.

More about the BEC project can be found here.