Competitions
/ News / Time for results: They work together for our safety

Time for results: They work together for our safety

We invite you to follow the effects of the joint work of partners from Poland and Ukraine within the PBU Programme, made possible thanks to co-funding from the European Union.

In Poland, voluntary fire brigades (VFB) have over 100 years of tradition. According to data from 2018, there were over 16,000 VFB units. They function in urban and urban-rural communes. They are a great support for professional firefighters, as they are often the first to reach the victims of accidents. In Ukraine, similar units began to be established in parallel with the launch of the PBU 2014-2020 Programme. Therefore, all kinds of experiences that Polish volunteer firefighters could pass on to Ukrainian partners were extremely valuable.

One of such possibilities was the regular project "Strengthening the potential of volunteer fire Department in rescuing victims of accidents on the roads of the Lublin Voivodeship and Volyn Oblast" (acronym PUFL), implemented precisely to improve the work of both Polish and Ukrainian volunteer fire brigades.

A general description of the PUFL project can be found in the "Projects" tab.

Only a few years back in Ukraine, only state fire brigades operated. Due to their decentralization, it was possible to create additional brigades supporting state units. Following the example of Poland, 15 units of the VFB were established in the Volyn Oblast. The experience of the Polish partner was the basis for the creation of this type of structure.

Thanks to the project, the VFB of the Lubelskie Voivodeship gained new equipment used in road rescue. Among other things, rescue bags, tactical vests, pneumatic cushions, hydraulic aggregates, hydraulic shears for cutting cars were purchased. 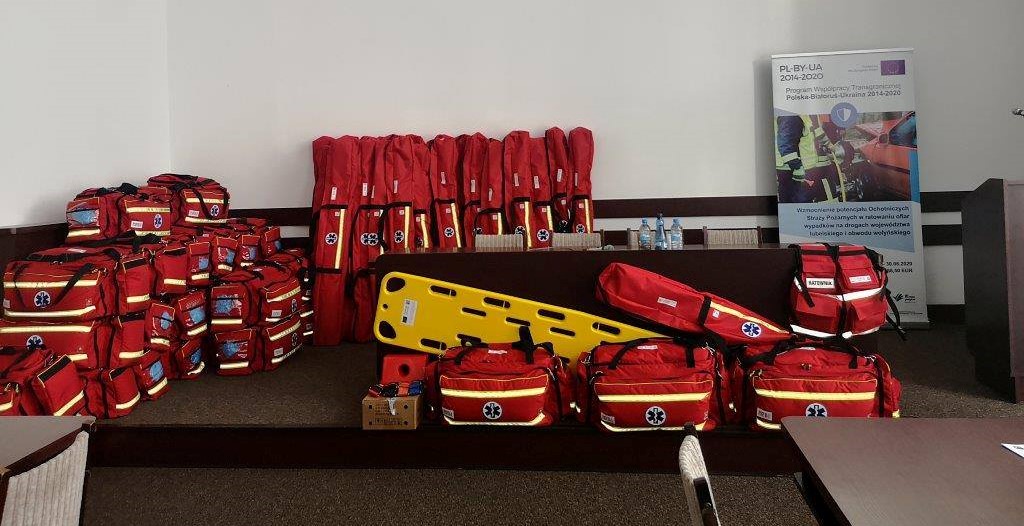 As part of the project, the Ukrainian VFB units purchased medical bags and tactical vests. The cooperation also resulted in the transfer of equipment and cars by Polish firefighters to colleagues from Ukraine. 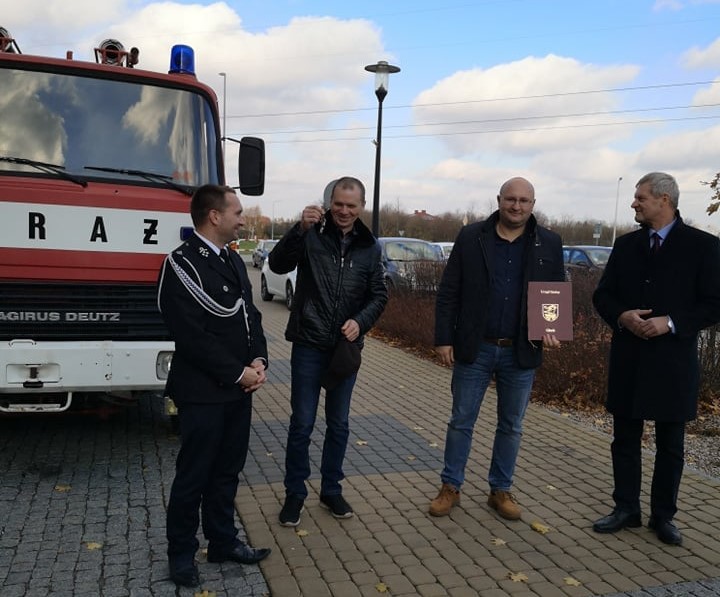 A 52-person group from Ukraine took part in the firefighting competition of the Lublin poviat. They were also a guest of two VFB units from the Głusk commune, included in the National Fire and Rescue System. Participants viewed the equipment and the event notification system. They talked about the principles of operation, reaction time, eligibility, and training. Volunteer firefighters from Wilczopole prepared a surprise in the form of a demonstration of saving a fire victim. The second surprise was the presentation of a fire engine, which the commune allocated to help Ukraine. On the second day of the visit, units from the Chełm and Wojsławice communes presented themselves.

The aim of the organizers of the visit was to present various units: both those perfectly equipped with modern equipment and those operating in more modest conditions. It was supposed to show the participants that in all conditions it is possible to act, create well-coordinated teams and help their communities in many areas of life. 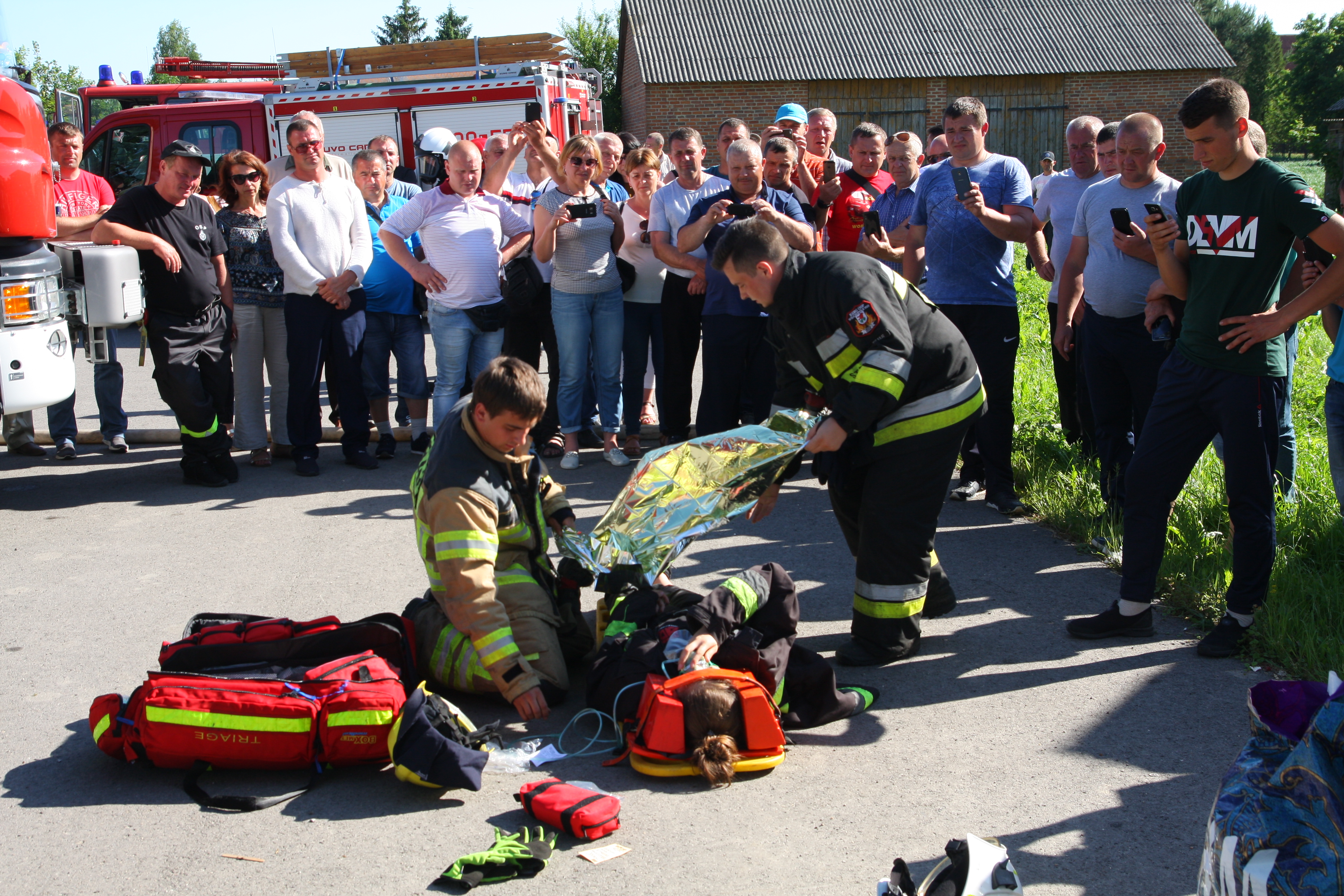 Due to the restrictions related to the pandemic, the second visit had to be organized on-line. The partners made every effort to ensure that the scope of the visit and its content was as effective as possible. In preparation for the visit, Polish firefighters made a half-hour film in which they presented the equipment and explained how a rather complicated rescue system in Poland works. Finally, they presented exercises to reach victims of a car accident and a house fire and to help the victims as soon as possible. The film was the substantive part of the on-line meeting. After watching it, firefighters discussed, sharing their observations and experience.

The video posted on the Internet is instructional material for other volunteer firefighters.

160 firefighters took part in joint Polish-Ukrainian exercises. A safe zone with sanitary facilities and a sound system, 2 cars to cut, mannequins, phantoms and services of the state rescue system to conduct and supervise the exercises have been allocated to their organization. The exercises simulated several road accidents with the injured. These were the pedestrians or passengers and drivers who needed to be safely pulled out and provided first aid. Volunteer firefighters were divided into teams, each of which performed different tasks. Professionals coordinated activities on an ongoing basis, commented and suggested how to react. 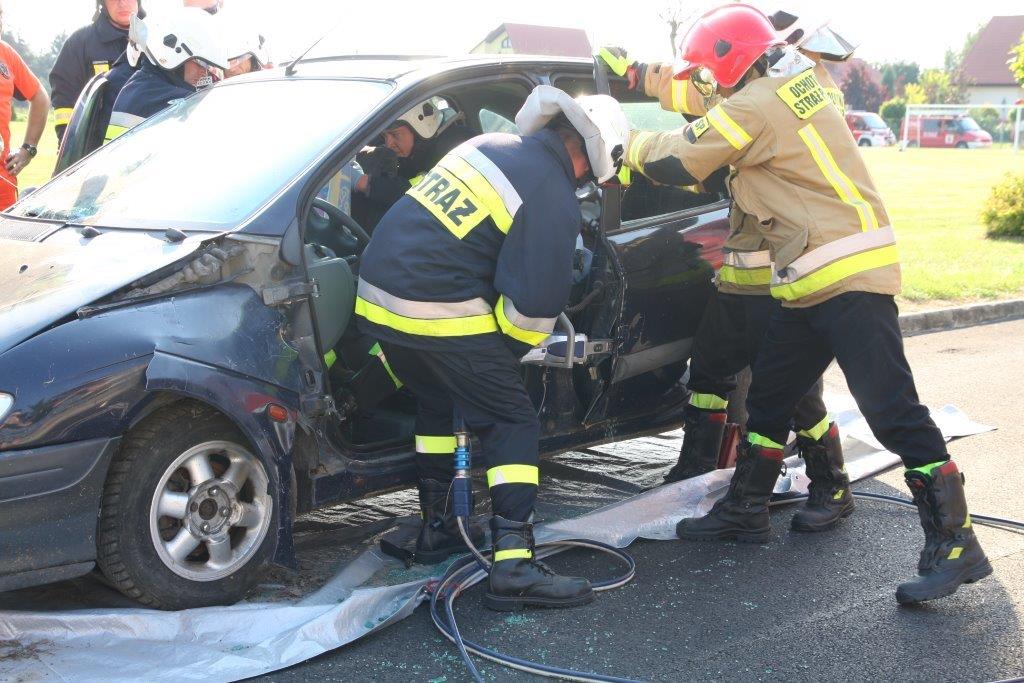 The training, which was to take place in Ukraine due to the restrictions caused by the pandemic, was carried out on-line. First, Polish firefighters made a 20-minute film in which they presented their team, equipment, and then a simulated accident that resulted in a car being cut. The Ukrainian partner also recorded a short film presenting road rescue equipment and procedures. Then, during the on-line meeting, both films were presented and the teams had the opportunity to ask questions and discuss.

In Poland, a series of qualified first aid training courses was conducted from February to November 2019. Practical and theoretical training conducted in 10 groups ended with a state examination. 370 participants who successfully passed the exam received a lifeguard certificate. 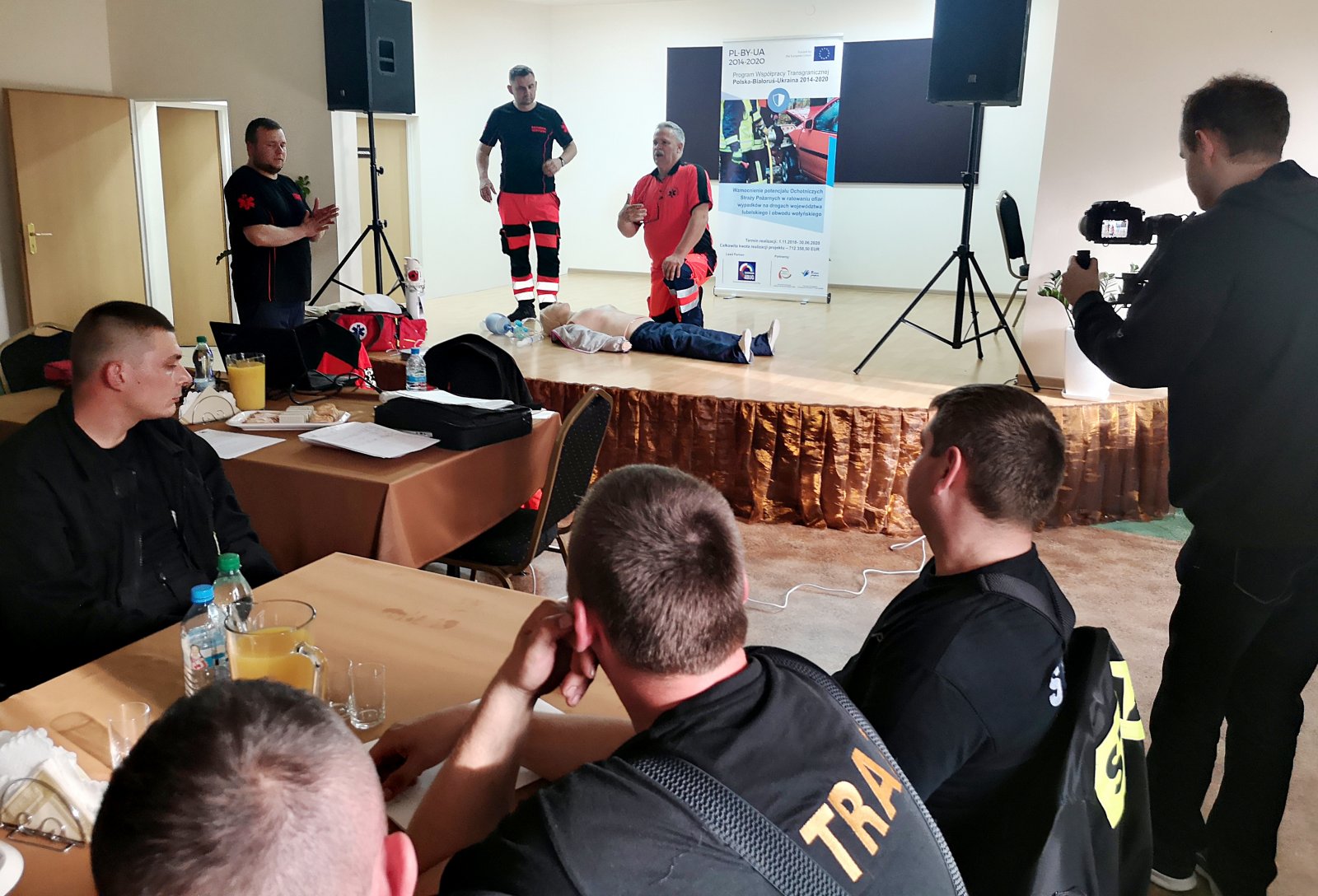 In Ukraine, 100 volunteer firefighters from 15 municipalities of the Volyn Oblast were also trained in qualified medical assistance. They ended with an examination and issuing certificates. The training was conducted in the training center of the Rescue Department of the Main Board of the State Rescue Service of Ukraine in Volyn.

The beneficiaries organized meetings with elementary school students from the Lubelskie Voivodeship and the Volyn Oblast. The participating firefighters, rescuers, and policemen familiarized children with the principles of first aid and road safety. The main goal of the campaign was to make people aware of the dangers that occur on the roads, the obligation to wear reflectors after dusk, that is, developing habits that can protect children from being involved in a road accident. The action was very popular. 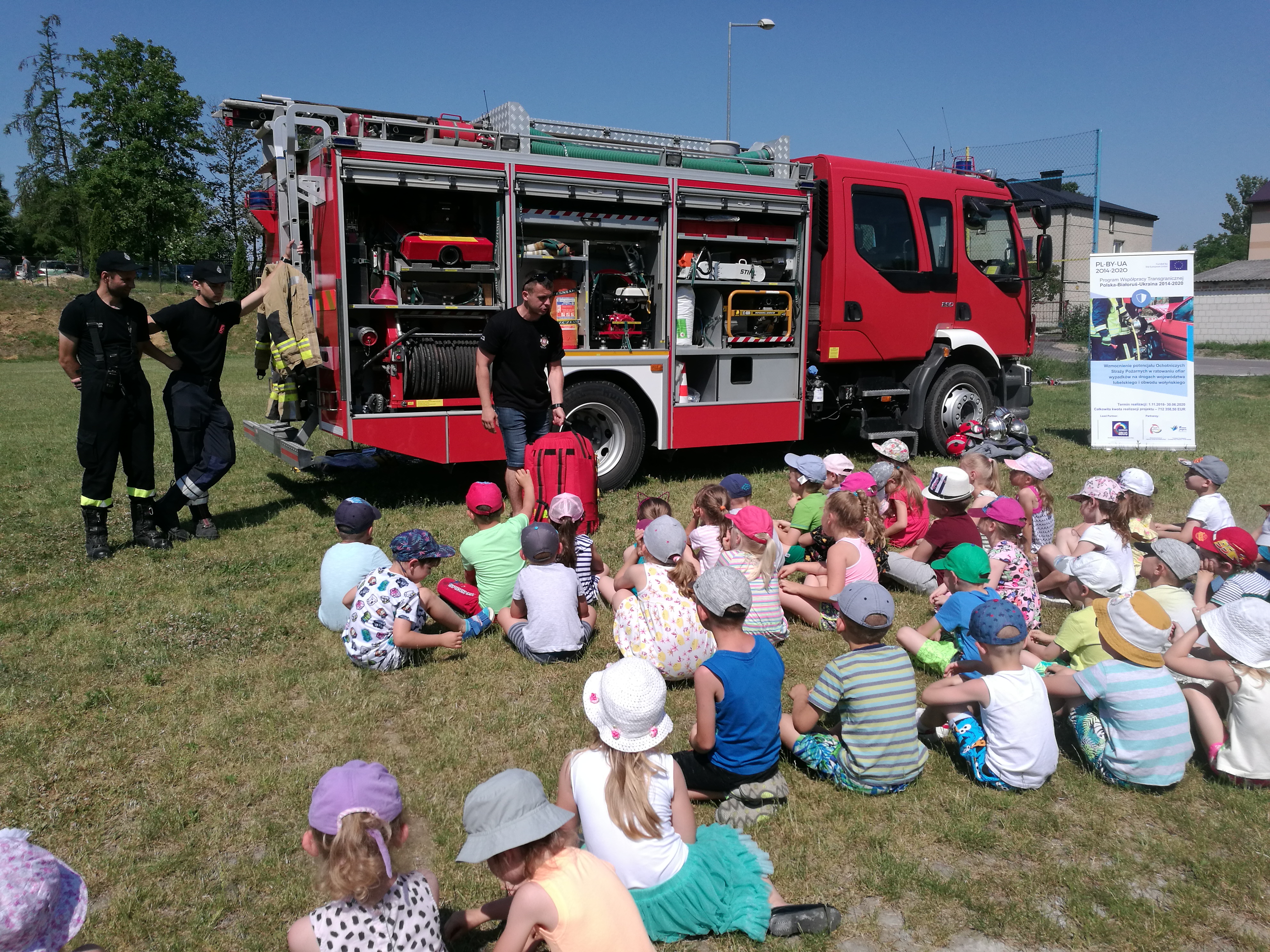