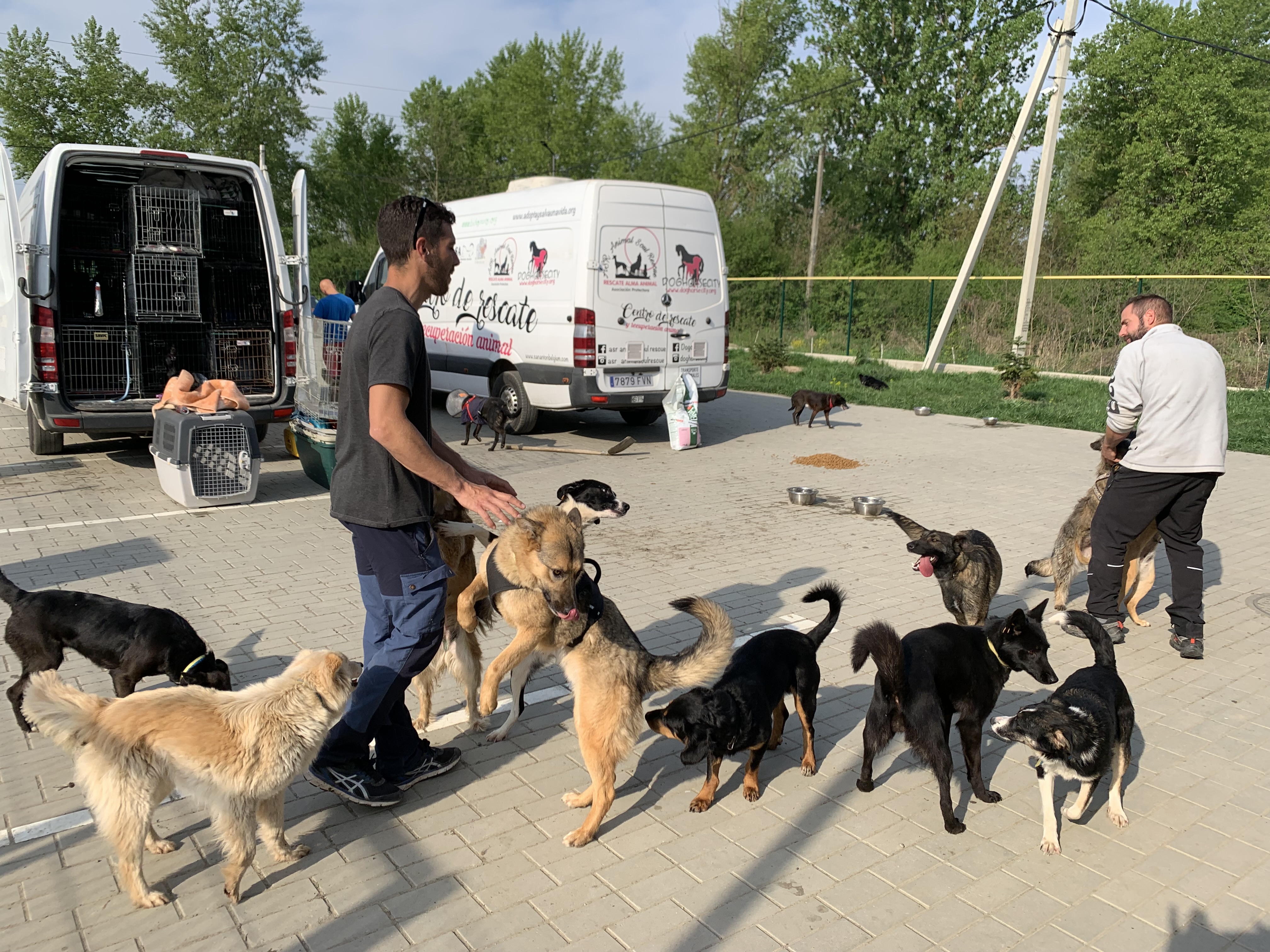 The first story is about Umka, a white retriever who, together with his owners, was hiding from shelling in a basement in Kharkiv and whose owners had to send him to a safe place in Zakarpattia region. The dog ended up in the shelter and was so frightened that he did not leave the quarantine for a month and a half, refused to go for a walk, until he made friends with another dog. He stayed there for 98 days, which was the longest period of stay in the shelter.

The second story is about the old lady, who had to flee from Kyiv with her Yorkshire terrier, called Yorik. The woman was housed in a home for the elderly, where no pets were allowed, so the dog had to be placed in a shelter. Every day she came to see her friend and to take care of him – she walked him, brushed his teeth, talked to him.

There is also a story about Richie, an old German shepherd, and Shera, the malamute, whose owners couldn’t find a place to live during the first days of war. Nobody wanted to rent  their property to someone with such huge dogs. The family had to sleep in their car until Richie and Shera were placed in the shelter, where they spent almost two months.

There is a story about three women who lost their home due to the war but, finding themselves in a new place, a town in Western Ukraine, found the strength to master new skills and are now serving a noble cause, helping abandoned animals in the animal control center.

This is a story about Spanish volunteers who collected 46 dogs in Ukraine, some of them in a difficult health condition. On their way home they received a warm welcome from their Ukrainian colleagues in a small cross-border town – Vynogradiv. They stayed there for three days, had some rest, the dogs got necessary medical assistance and their documents for border crossing were arranged.

This is also the story of a German lady who has been rescuing homeless dogs from Hungary and Serbia for many years, and during the war she also started helping the dogs from Ukraine. She brought almost 3 tons of dry dog food to the animal control center in Vynogradiv and took out 25 dogs for adoption in the countries of Northern and Western Europe.

In fact, there are much more such stories, and all of them make a part of one big story - the story of the joint Polish-Ukrainian project CBC4animals, which was created and implemented by the people for whom caring for animals is not just a job, but a life mission. In Rzeszów, Poland the project involved the extension of an already existing animal shelter with 25 years of experience behind, while in Vynohradiv everything started almost from the scratch. A small shelter transformed into a modern animal control center. It was a totally new concept for this town, and even the fact that the money would be spent on the welfare of dogs, not people, caused some public disapproval. But very soon, thanks to the devoted work of the project team, the animal center appeared in Vynohradiv, which has no equals in terms of technological advancement not only in Ukraine, but also in many Eastern European countries. The center's employees have been performing vaccinations, sterilizations, examinations, providing medical assistance, shelter, organizing adoption and holding educational activities.

We can say that we managed to change the situation with homeless animals in our town. As part of the project, we performed 100 free sterilizations, and after the opening of the Center we do 200 sterilizations each year, which led to the reduction in the number of stray dogs. But the most important thing is that the people themselves have changed, their way of thinking, their treatment of animals. Now, if you happen to see a few stray dogs on our streets - they are cheerful, non-aggressive, well-fed animals... Yes, our town has the most well-fed stray dogs! But most dogs find a new home. For example, in 2021 221 dogs out of 353 were adopted and another 53 were returned to their guardians. That makes the adoption rate at the level of 77%. In 2022 the results would be even better, but everything has changed with the war... - says Arthur Sherehi, project coordinator.

On a regular basis the Vynohradiv Center serves 350 animals per year but only in the last 6 months more than 300 animals have been treated. These were the dogs of internal refugees who stay there temporarily until their owners find a long-term housing as temporary accommodation for refugees usually doesn’t allow pets. Sometimes local people went abroad and couldn’t take their dogs with them. Instead of the planned 50 dogs, about 120-230 animals live in the Center at one time. There is much work to be done and the demand for food and medicines has also increased.

When the war started, we decided that we will contribute the best if we do what we can do the best. We carried out vaccinations, did chipping and everything necessary for the transportation of animals abroad, treated them, gave them a temporary shelter, helped with the transportation of animals. We even invited parents and children to play with the puppies so they could take their mind off the war. Our working hours have extended, we had to hire new employees - says Arthur.

Fortunately, in this difficult situation the Vynohradiv Center was not alone. The cooperation between both project partners did not end with the completion of the initiative. Animal Protection Organization from Rzeszów, helped with dog food and medicines. They also provided 250 chips for free, which were necessary for Ukrainian dogs to travel abroad. Moreover, 10 dogs have been taken to their Kundelek shelter in Rzeszów for further adoption.

Gradually, the aid began to arrive from organizations and philanthropists from various countries around the world. To a large extent, this happened thanks to refugees from other cities in Ukraine who received help here.

... The war became a tragedy for millions of Ukrainians, ruined their lives and their pets were a part of it. For a dog, the owner is the whole world. But what if the owners died during the shelling? Or squeezed into the evacuation train at the last minute rescuing their children? Left their dog in a carrier at the train station because they didn't know if it would be allowed in their new home in Europe? The dog is looking at this mad world with the eyes full of terror, runs away from the sounds of gunshots, waits for months for its owners near an abandoned house. But in dark times you can clearly see bright people. People who, in spite of everything, care about the weak, about those who cannot ask for help with words. And it is incredible to see that a good deed causes more good deeds and the chain of good deeds never ends.

More about “CBC4animals” project can be found here.