Time for results: Watching the stars

We invite you to follow the results of the joint work of Polish and Ukrainian partners within the PBU Programme, made possible thanks to co-funding from the European Union.

The magical charm of the starry sky is an inspiration to many. Observing the stars together is not only science or education, but also fun and the beginning of many friendships and hobbies.

The aim of the project was to promote astrotourism in the  Starry Sky Park "Bieszczady" (PL) and the Transcarpathian Dark Sky Park (UA) and to develop Polish-Ukrainian cross-border cooperation in the field of astrotourism and dark sky protection. The project offered a new way of looking at the starry sky of the Carpathians, showing its beauty and drawing attention to the problem of light pollution.

A general description of the CarpathianSky project, implemented by The Institute of Development of Carpathian Region (UA) and The Association for Innovation and Technology Transfer "Horizons" (PL), can be found here.

To investigate the state of the environment in the Transcarpathian Dark Sky Park and the Starry Sky Park "Bieszczady", experts in light pollution and astronomy and the environment were involved. The experts' reports became the basis for a publication.

ILLUSTRATED E-GUIDE
"The quality of the starry sky in the Polish-Ukrainian cross-border area and opportunities for the development of nature tourism and astrotourism".

The guide shows selected locations for observing and photographing the starry night sky and selected natural attractions in the Polish-Ukrainian border area.

STRATEGY
"Development of nature tourism and astrotourism in the cross-border area of Poland and Ukraine".

The Strategy was prepared on the basis of light pollution reports prepared by experts, a description of natural heritage sites and an illustrated e-guide. An important role in finalising the Strategy document was played by holding consultation workshops with the inhabitants of the project areas. These were aimed at exploring their needs that could affect and relate to the development of nature tourism and astrotourism in the region. All the ideas developed during the workshops were included in the final version of the Strategy.

Based on the developed strategy, research of natural heritage sites and the quality of the night sky, the project partners developed the educational tourist route "Carpathian Starry Path". A section of the Javorník ridge was chosen for the route, which starts near the shelter below Javorník and ends at the top of Javorník (1017 m). The site is characterised by good night sky quality (21.61 magnitudes per square second of arc[1]). The route is equipped with a digital SLR camera with lenses and tripod, a telescope and a sky quality meter (SQM - Sky Quality Meter).

In order to make it easier for tourists to navigate this route, the Ukrainian beneficiary developed its map in the form of a leaflet and a rotating map of the starry sky. 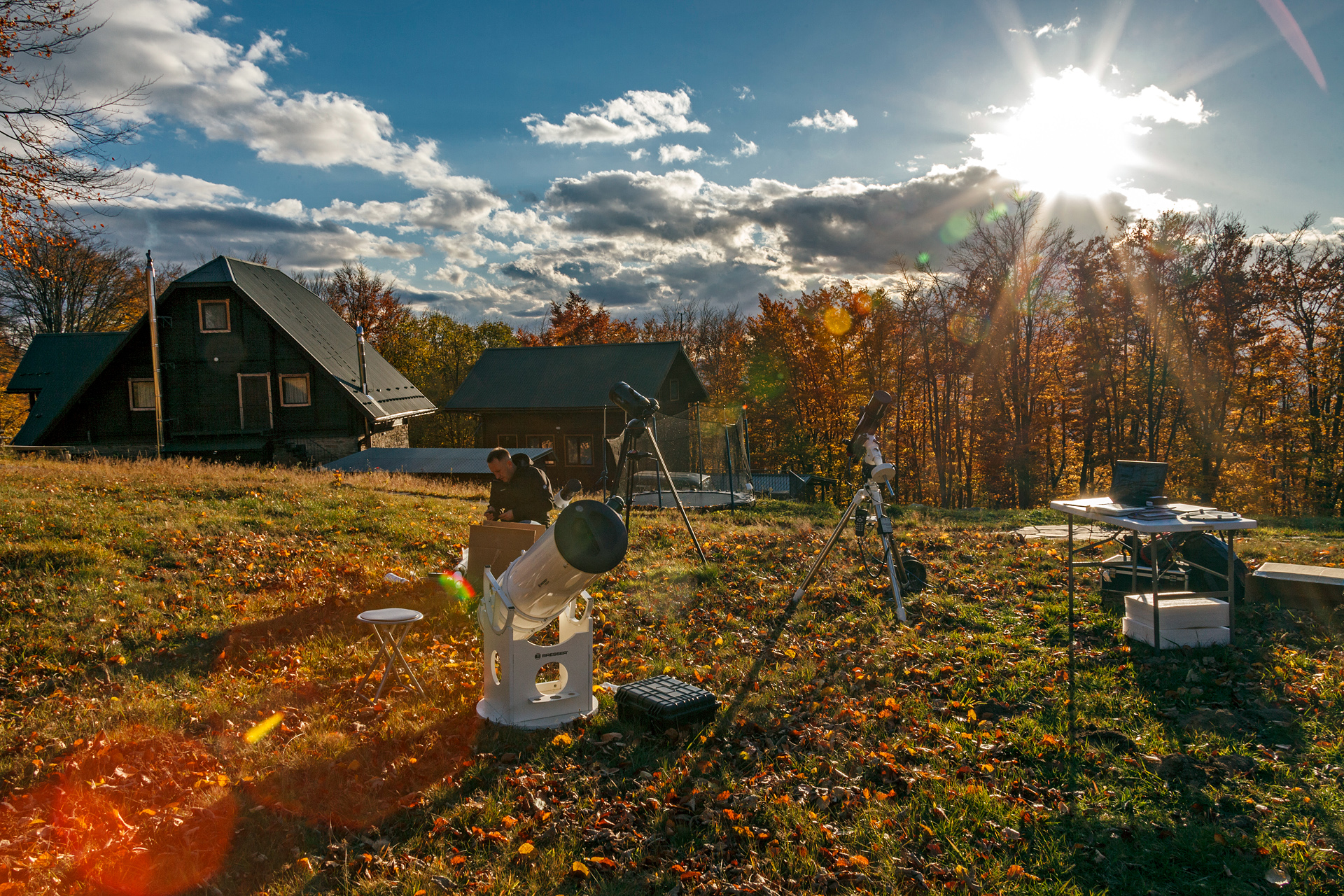 In order to promote “The Carpathian Starry Path”, the project partners organised a pilot astronomical show. It was attended by as many as 120 people - families with children, local residents and tourists interested in natural heritage. Specialised equipment purchased by the project was used for the show. Participants measured the brightness of the night sky with an SQM device. In turn, using professional telescopes, they were able to observe the planets Jupiter and Saturn and the natural satellites of the Earth and the Moon. The participants also took astrophotographs.

On the Polish side, in turn, the beneficiary organised 15 astronomical shows and workshops attended by more than 1,600 people. The shows were held in popular tourist locations in and around the Starry Sky Park "Bieszczady". In addition, mobile planetarium shows were organised in Lutowiska, Lesko and Baligród.

Each astro-show was a 4-6 hour event that consisted of the following:

TRAINING AND EXCHANGE OF EXPERIENCE

In August 2021, the Polish project partner organised a training session for educators of the Zakarpattya Dark Sky Park. The partners discussed, among other things, the problem of light pollution, astronomy and nocturnal nature. They also shared their experiences in organising astro-shows and operating astro-nature observation equipment.

The conference was aimed at representatives of regional and local authorities and administrations, in particular specialists in environmental protection, promotion, tourism and investment, travel agencies, environmental agencies, the media, environmental experts, students, educational and research organisations and institutions. Conference participants discussed the Strategy developed in the project and took part in a film screening of the two parks around which the project was implemented.

The beneficiaries produced 4 short promotional films about the natural heritage of the two parks, project participation and astrotourism. The films were produced in 3 languages (PL, UA and EN). Two of them were prepared for VR glasses and planetarium use.

Both parks included in the project have joined the prestigious International Dark-Sky Association (IDA). The IDA promotes solutions that allow people to appreciate dark, star-filled skies while enjoying the benefits of responsible outdoor lighting. Parks that are active in this Association can count on valuable guidance and benefit from the experience of other IDA member institutions.

Together with the beneficiaries and participants of the project, let us look out for the first star in the dark sky. May it bring us good luck.

[1] A unit of brightness used in astronomy. It is a measure of the amount of light reaching the sky quality meter from a unit area of the sky. The higher the number, the weaker the light source.

[2] IDA - The International Dark-Sky Association - works to protect the night sky for present and future generations.